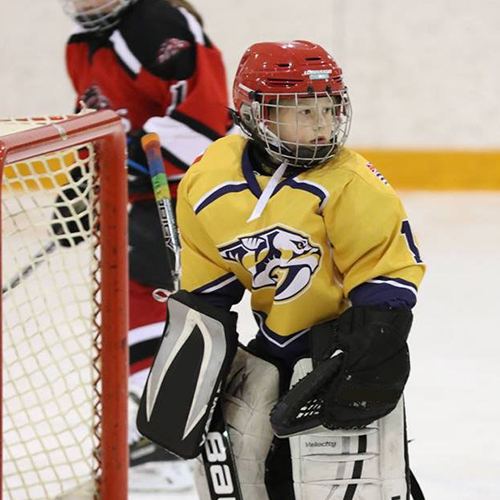 “I have always believed that you need to follow your dreams and carve your own path, and because Everly had chosen hockey as her interest, I wanted to make sure she could pursue that passion. She joined skating lessons, hockey tots and enjoyed parent and tot ice time through our local community centre until the age of four-and-a-half, when she was able to join her first official hockey team.

When the time came for her second year of hockey, things took a shift on the ice into more of a celebration. Everly found her groove, she chased the puck with focus and determination and was known as the ‘celly’ queen. Her first tournament that season awarded her with seven goals along with seven VERY excited, fully stretched arms into the air and massive smile type of celebrations. When her season came to a finish, her coach presented her with an award for the best celebrations by a sniper.

‘Mom! Hockey is on!’ are words I've heard this year and there's a pile of hockey cards from Tim Hortons all sorted into an album with every team memorized. We have YouTubed player and goalie techniques, flipped over our coffee table to use as a net to practice her goalie skills at home, and drawn chalk outlines on the wall outside our building to practice shooting. We have become a hockey household, a hockey family.

Now entering her third year, Everly is determined to improve her goalie and skills on the ice and make herself known. Her present dream is to score a goalie goal like one of her idols, Pekka Rinne, in his game against the Chicago Blackhawks. Although her ultimate goal of playing in the Olympics may still be a decade or so off, this six-and-a-half-year-old has the conviction to make this a reality!”